It’s amazing how the world has changed in the past century. We no longer place a vinyl on the player, nor do we call up a gumshoe to solve a crime. Our technologies have advanced from expansive mainframe rooms to smart phones – and our smart phones hundreds of times more powerful than those massive computer towers. Even the past two decades have witnessed incredible advances.

Automobiles have also undergone multiple transformations. From design schemes to increasingly complex infotainment centers, nearly every facet of a vehicle is different than it was just a few years ago. This includes the mechanical workings of an automobile. If you’ve ever taken a car or truck to a mechanic due to an issue with the engine, it’s likely that your jaw came unhinged at the sight of the “labor” costs. In that moment, you may have pined for simpler times.

Up until World War II, the overhead valve engine did not exist. Sales of vehicles were on the rise, but streets were not completely inundated with cars and trucks. People who did own an automobile typically did not traverse across the nation – or even travel far beyond the neighborhood. This meant that engines did not have to perform at high RPMs for long distances, as well as boast great fuel efficiency. 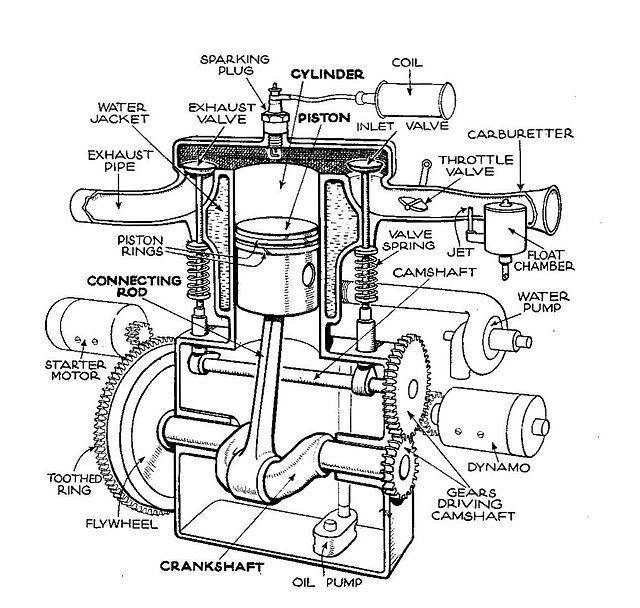 The L-Block engine, also known as a flathead, was the predominant design. It was simple and effective; its disadvantages only became such when priorities among automakers and consumers changed.

A flathead is a flat piece of cast iron bolted to the top of the engine block. The entire valvetrain, including the valves, are inside the block beside the piston instead of the cylinder head (as in an overhead valve engine). A recess in the head allows for valve clearance, creating a pathway between the valves and combustion chamber. Its valve gear is very basic: a camshaft that operates the valves by simple tappets; it does not require other mechanisms (e.g. rocker arms, overhead valves, overhead camshafts, et cetera).

The valves sit at the sides; therefore, they are known as sidevalves. This arrangement is still found in small engines, such as lawnmowers or rotary tillers, but has been replaced by overhead-valves in automobiles and other large vehicles.

Advantages of a Flathead

You could summarize its advantages by stating that it is simple, reliable, cheap, compact, and responsive. Since it does not require an overhead valvetrain, the flathead is cheaper to manufacture.

One of the most important benefits of a sidevalve design is its immunity to the issues that befall overhead valve engines. Should a valve drop (break), the engine could still safely operate and very limited damage would occur. An OHV engine would suffer complete engine failure should a valve drop. This, as you can naturally assume, is a major advantage in the favor of sidevales.

Disadvantages of a Flathead

There are a few disadvantages to the sidevalve engine, which include poor gas flow, inadequate combustion chamber shape, and low compression ratio. This results in a low-power output. Though there were automakers beginning to participate in speed and performance competitions, the cars made for the public weren’t engineered for incredible torque and horsepower.

Another issue that arose regarding the flathead is that its configuration has low volumetric efficiency with exhaust gases. In other words, it “breathes” poorly. This means that the car could not perform at high speeds for extended periods of time.

We at Raleigh Classic hope this helps you better understand the flathead engine. Should you have further questions about this design, or about our auction, please do not hesitate to contact us through this blog or on our website.